What is it and how is it calculated?

The Copper/Gold ratio, HG/XAU, is a simple indicator that you can calculate on any platform that allows you to manipulate the data. All you do it take the price of copper and divide it by the price of gold. In Excel, it is literally =HG/XAU, in Stockcharts.com you go $copper:$gold, etc. It is simple to do the ratio on almost any charting platform.

Where did it come from?

I don’t know who had the original idea, but I have seen charts over the years that had the reverse gold/copper, XAU/HG, overlaid on the 10-Yr bond.

However the concept really broke out in popularity when Adam Robinson talked about it on the Tim Ferriss podcast. On episode #210 “Becoming the Best Version of You,” Adam was on a panel and about 1hr 43min in was describing a situation and said “if we see see copper vs gold rally sharply, then rates will rally, but if copper vs gold is going lower than interest rates are gonna go lower.”

He explained it a bit further, but after that, it started popping up everywhere. Twitter started having plenty of charts of different commodities/gold ratios everywhere you looked, one guy even did a paper about lumber/gold ratio. Finally, Jeff Gundlach at Doubleline used it in a presentation.

But what is the big deal, why should we care, what does copper vs gold show us?

Well, the copper vs gold ratio, and to an extent most commodities vs gold, show if inflation is headed higher or lower. It is not perfect, it did have a 20yr period of being perfect, but it is an excellent indicator and once you understand it, you will have it on your dashboard and watch it every day.

Why do people buy copper? How many copper bugs have you come across? When was the last time you heard that there was excess copper demand because real rates were negative?

People mostly buy copper because they need copper. When do people need copper? When they are building things, things like Houses, cars, phones, wires, pipes, batteries, etc., they buy copper. You probably guessed this already, but when they need copper we usually see economic growth.

What about gold? Why do people buy it?

Well, despite all the bugs always going nuts saying “hyperinflation is coming so buy gold” the evidence doesn’t do a great job backing that up. In fact, gold seems to do pretty well during deflation. When real rates are under 1% gold and gold stocks tend to do very well.

So, the copper/gold ratio is simply measuring the relative demand of copper vs gold. People are buying both of them every day, but the ratio looks at which one is being bought more aggressively. 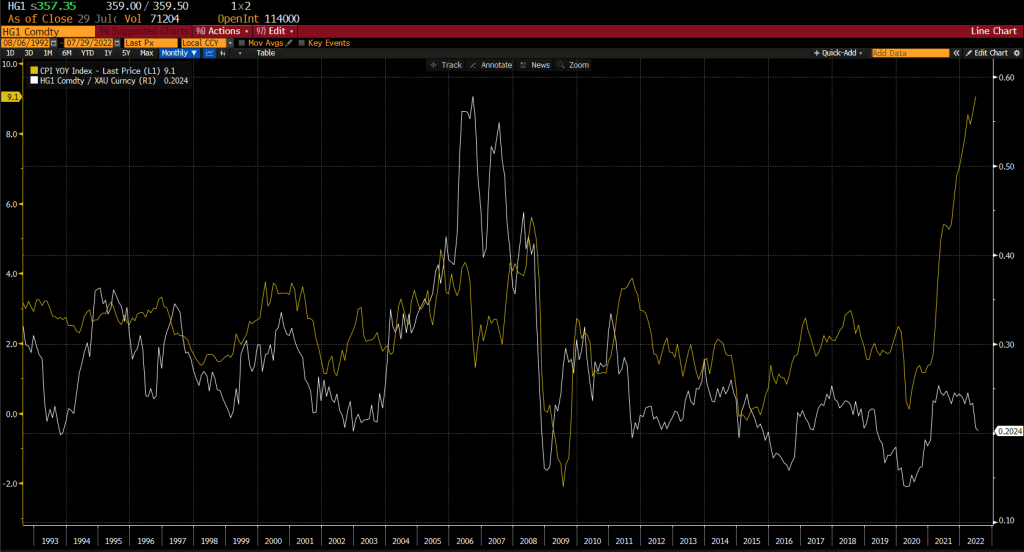 What asset on earth is most affected by higher/lower inflation?

If you said US Treasuries, then go buy yourself a Choco Taco for a prize.

Treasuries are considered the risk free rate for whatever maturity of assets you are looking at. So, they don’t really trade based on credit risk. Maybe one day, but not today. Instead, they trade almost purely on inflation risk. So, if you had a real time indicator of inflation……yeah sounds pretty good right? Let’s look at some charts.

In the next chart we have the copper/gold HG/XAU ratio overlaid with the 10-Yr yield. Do you see a relationship? There are some scaling issues but the correlation and relationship is very easy to see. 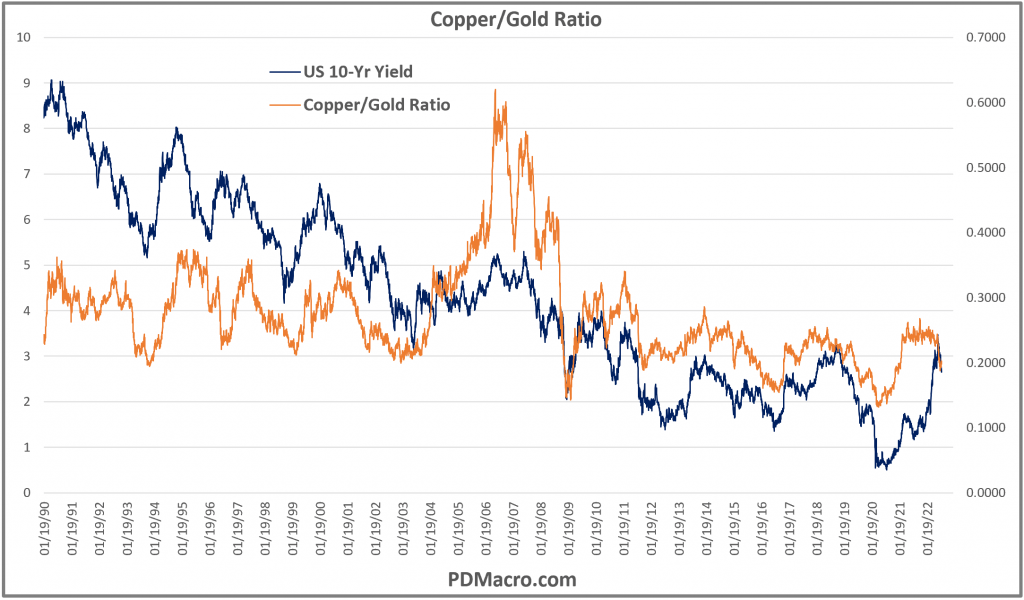 If copper/gold is moving higher and the 10-Yr yield is moving lower, then what almost always happens is that the 10-Yr eventually reverses and catches up with the 10-Yr.

In the next chart you can see a few times when there were great divergence trades, a few times with just a leading indication, and then the move off the COVID bottom that represented a MASSIVE divergence, followed by a second chance to get into that trade.  So far, the copper/gold ratio has an excellent track record of LEADING the move in rates. 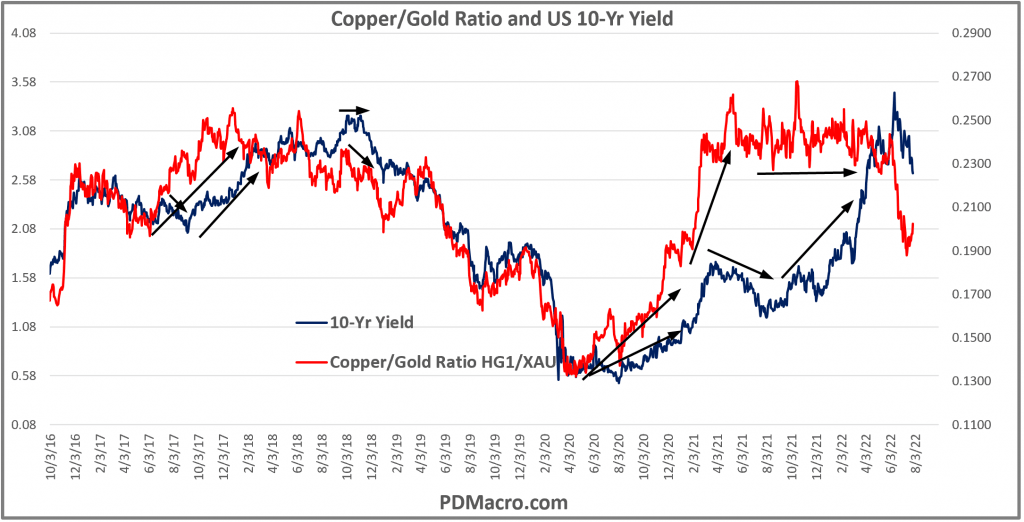 That of course brings us to an interesting point because right now there is a massive divergence going on once again as the copper/gold ratio has been dropping like a rock, and rates for the most part have been climbing (the past 2 weeks there has been a bit of a convergence going on).  Do the lines meet up once again? Maybe.

But here is where understanding WHY the relationship matters. When metals traders are buying copper more aggressively than gold it coincides with inflationary periods. But are all inflationary periods the same?  Aside from the fact that prices are rising, the answer is probably not. Most inflationary periods have a lot in common but this time is always a bit different. So is this time different enough?  We won’t go into our view here, but it is something worth thinking about. In fact every large divergence in an indicator with strong causality and correlation should be thought about. This is why they are called indicators…they indicate something.

More fun with the copper/gold ratio.

So if inflation is one of two parts to the Growth/Inflation Matrix, and has SOOOO much interplay with growth, how does the ratio hold up against the ISM PMI, or in other words the timely GDP indicator? 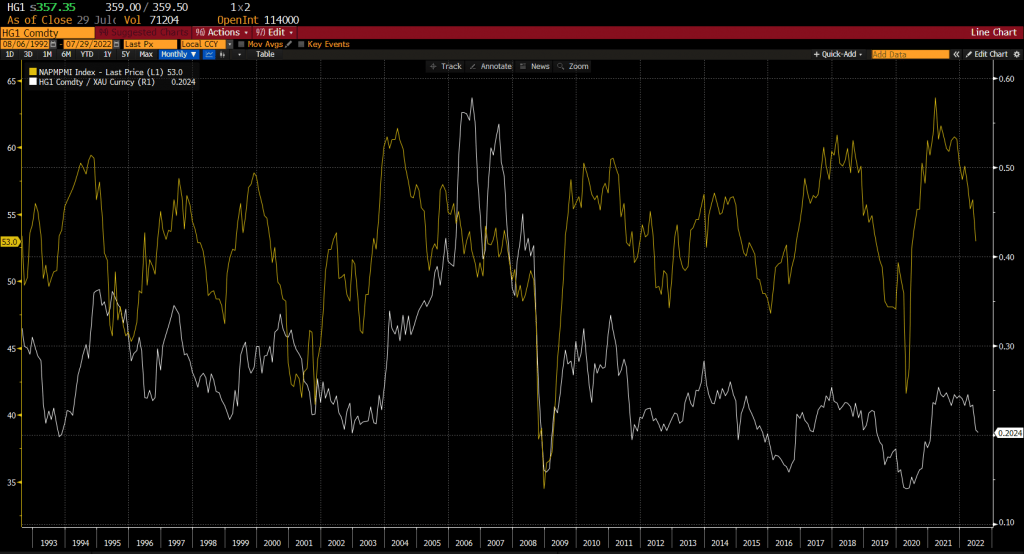 As you can see in the chart above the relationship is not nearly as tight as with inflation and the 10-YR yield, but the basic cycle usually works out the same. Of course this chart goes back to 1992 and NOT to the 70’s.

Over time we will add to this piece. Hopefully I made the case that the copper/gold ratio, while goofy sounding at first is actually an important indicator that has real signal. In future updates we will show how you can use a trend following approach with this, how you can use other commodities and commodity indices, etc. to track the likely path of inflation and the 10-YR yield, and other way in which you can incorporate HG/XAU into your process. For now we hope you would spend some time looking at it on your charts and add it to your dashboard.

This is the first in a new series of pieces we will be doing on relatively simple indicators and models that should be part of any macro traders dashboard. Nothing is the holy grail, but there are several useful tools that indicate different conditions, and the copper/gold ratio is both as simple as it gets, and about as useful as well.