What is the Baa-10-yr yield spread?

The Baa-10Yr yield spread is simply the yield on Baa rated bonds minus the yield on the 10-Yr US Treasury yield. You can get the Moody Baa yield and the US 10Yr yield on the FRED website. You can even do this with the FRED Excel plug in.  Alternatively you can get almost the same effect by taking the ETFs LQD and IEF and in Excel  doing =LQD-IEF or on Stockcharts.com go LQD-IEF.  It is really simple to do.  But why is this squiggly line useful?

Do you believe in smart money?

Who buys and sells bonds? Well everyone does sometimes, but day to day it is primarily fixed income fund managers. What is a fixed income managers goal? The generic version says their number one goal is to get their money back. So presumably as a group they are more attuned to risk than your typical equity manager.

Some believe that fixed income investors also tend to be literally smarter as well. They are definitely better at math than a typical fund manager but who knows if they are actually smarter. But for our purposes this part doesn’t matter. Just the focus on risks actually can inform the yield spread enough to yield results for our use.

So here is a chart of the Baa-10Yr Yield spread. The measurements on the left are simple the bps-basis points difference between low rated investment grade debt and 10-yr US Treasuries.  When it is low investors presumably think risks are low, and when it is high they think risks are high. When they are super high it means it is the 2008 financial crisis when a lot of people thought they might never get a lot of their money back. 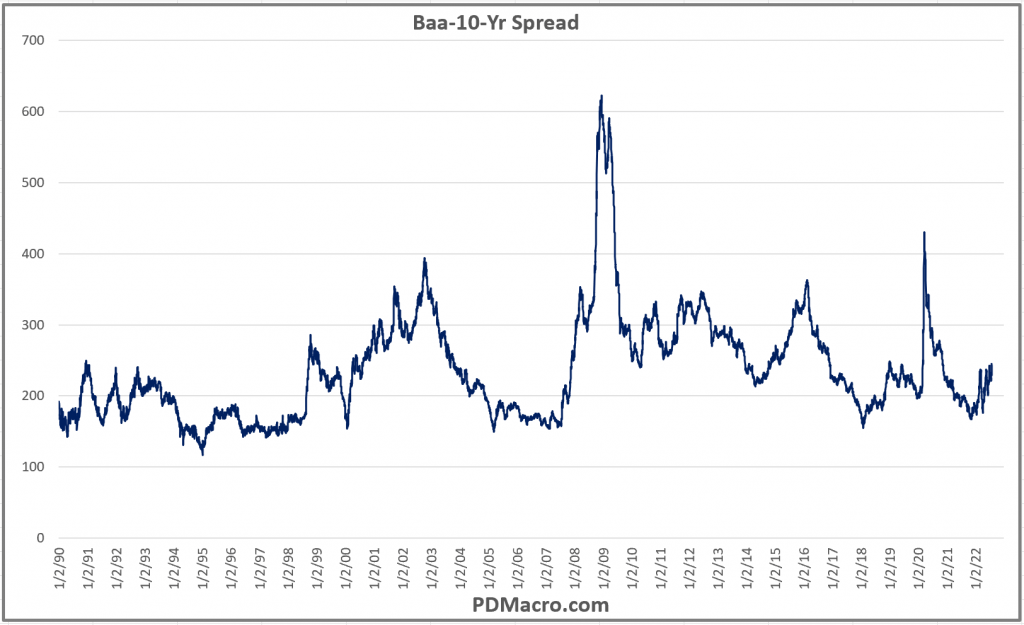 If we overlay the SP500 with the spread you can see how higher spreads represent lower prices and vice versa. 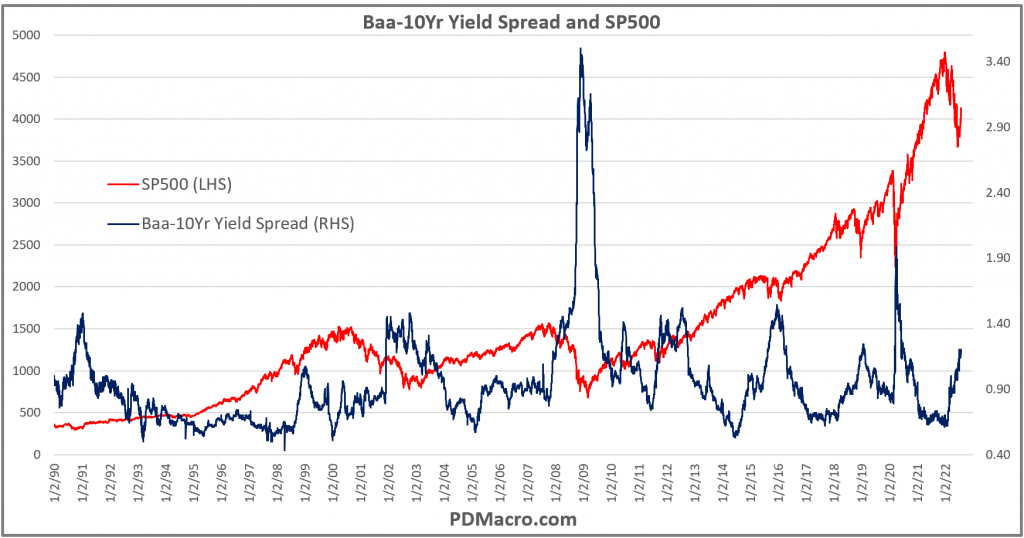 Usually the spread is in the 150-380 range or so with 150 being low and 380 being super high. But  spread levels relative to subsequent stock market returns are not the only way to use them against other asset classes. For sure there is value in that approach, and in a future piece we will write about them, but we look at the Baa-10yr spread as a charting indicator as well.

Flip it upside down (Invert it)

We almost said reverse it, but then a Missy Elliot song got in our head, so instead let’s invert it. If we flip the Baa-10Yr spread, we can see when fixed income risk appetite is increasing along with stock prices, and also see when it is NOT moving along with stocks. 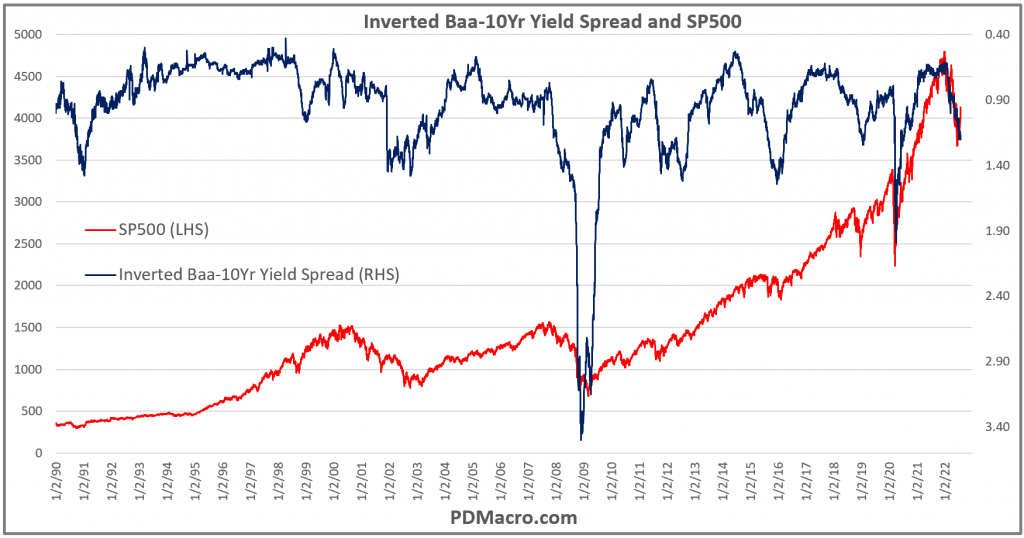 As hard as it is to believe you can actually see a few divergences in the chart above, but that chart objectively sucks to use. And now we have to get into the strange and dark arts of double axis charting, also known as chart crimes. Jake at @EconomPic on Twitter has a amazing thread of chart crimes. I mostly agree with him, these double and in some cases the triple axis charts, can be misused. You can scale anything to fit your narrative. if you start shifting things forward and backwards and then scale it as needed you can probably make your golf game look like Tiger on his best day.  So we try really hard to fight against the urge to fit the narrative, actually we don’t have that urge much as we are obsessed with narrative shifts, but still you start to have a view and sometimes everything looks like the hammer you need.

So how do we use this data on a chart without being a chart crime charlatan? Easy, first know what you are looking for, second don’t adjust the scaling 20x.  There you go lol.  In the current case we are looking for when the Baa-10Yr spread is going in one direction and stocks are going in the other. That might be a bit simplified but it is basically what we are looking for.

Looking at the inverted spread and the SP500 from 2018-2020 we can see a few things. First is that over time you have to adjust the scaling just to see things better-we didn’t do that much in this chart-and Second is that at the bit turns the smart money, the fixed income investors, tend to do a decent job at scaling back risk before equity investors. Not perfect, and some false signals, but they do pretty decent. 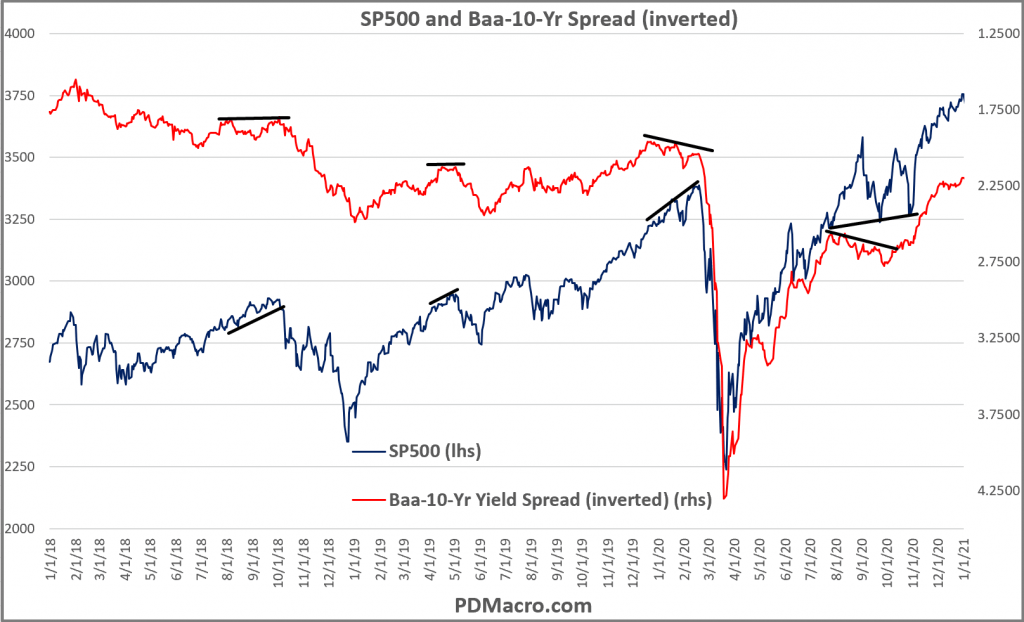 We could have drawn at least three decent sized misses on that chart as well, but the most of the misses are when fixed income starts to de-risk but the market never falls.  Still the indicator is not perfect at catching all the minor and medium moves. But it does seem VERY good at catching all the major moves. The beauty of the major moves is that there are ALWAYS multiple strong signals that something is amiss.  In our piece on the XLB/XLU Basic Materials Utilities Ratio, we saw how the XLB/XLU ratio was also not confirming the new highs in the SP500, and at the same time we had a very flat yield curve. On the Feb 19th 2020 peak in the Sp500 the US 10-2 spread was 14 bps. Everything but the index was pointing towards less risk, not more.

What is the Baa-10Yr yield spread telling us now?

The spread peaked back on 11/26/21 and the SP500 peaked on 1/4/22. Coming into the March rally the spread coincided with the SP500, and in the May rally it was ahead by a couple of days.  Right now there is a bit of divergence forming. So far it is only a few days, but if it continues it “could” be the start of a next leg down. But, and hopefully we have been clear on this, we don’t trade an indicator win a vacuum.  This is an underrated indicator, it is not a model by itself. 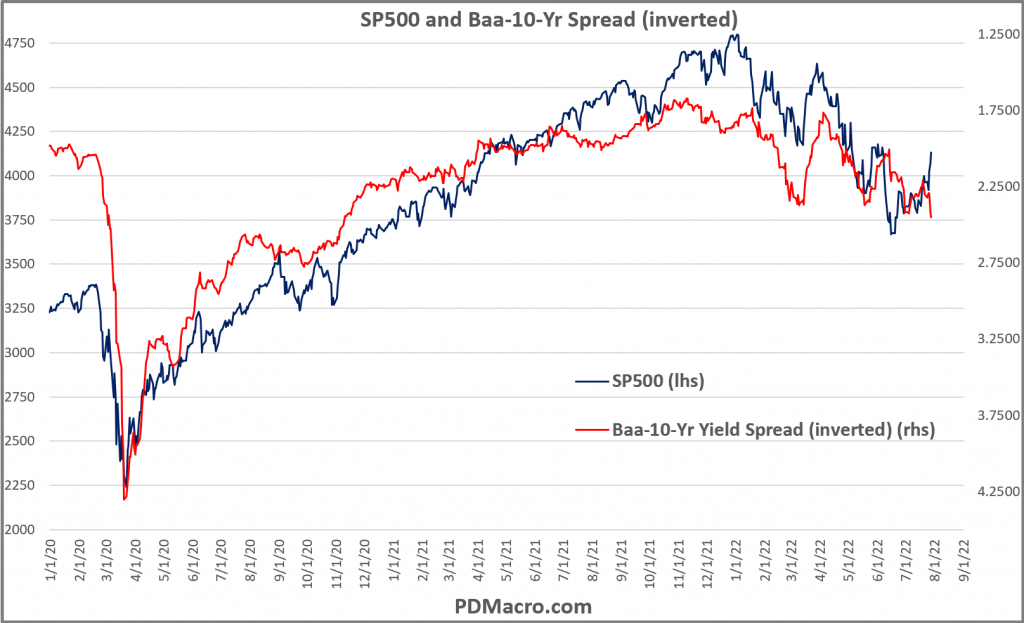 Finally here the same chart but instead of the Baa and 10Yr yield we use the LQD and IEF ETFs. In Stockcharts.com you can do LQD-IEF and the chart looks awfully similar to the inverted Baa-10Yr spread. This chart is using weekly data going back into 2002. But you can see where the “smart money” was de-risking ahead of the 2007 peak, the 2020 peak, etc. You can also see where they were a bit more worried about a slowdown than equity investors in the 2014-16 period. They are called the “smart money” and not the “perfect money.”

This is the third in a new series of pieces we will be doing on relatively simple indicators and models that should be part of any macro traders dashboard. Nothing is the holy grail, but there are several useful tools that indicate different conditions, and the Baa-10Yr yield spread is one of the better ones. It not only informs you on part of the fixed income market, but also informs other risk assets like the stock market.